More Qatari women are graduating with college degrees. But society may not be ready for them. Haneen Hindi and Mai Akkad report. 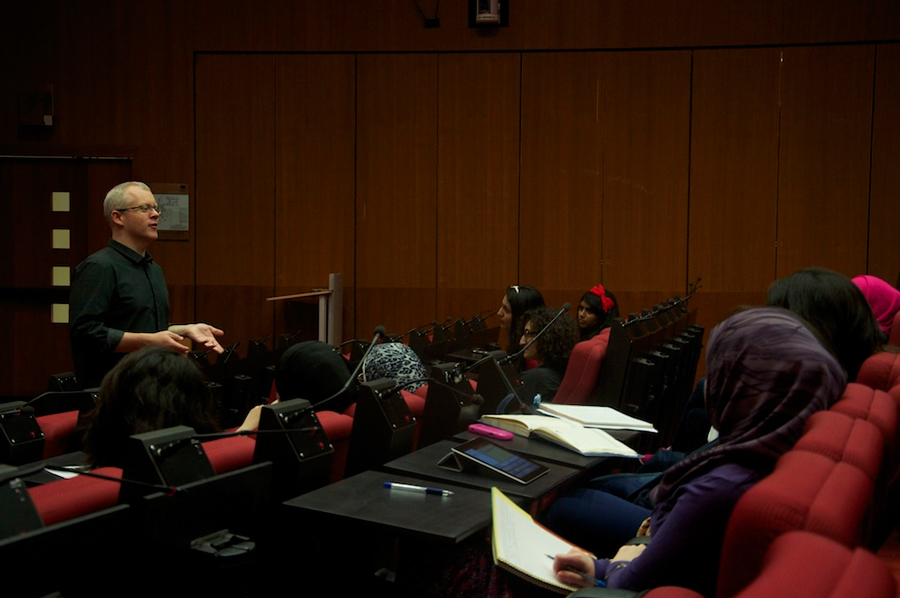 By Haneen Hindi and Mai Akkad

More Qatari women are getting college degrees, but is society ready for them?

There are six women enrolled in universities in Qatar for every man, according to a report cited in the London-based Independent newspaper. Educators say this trend is mirrored in the Qatari community.

This is in part due to women becoming more ambitious about getting higher education, experts say. Another reason is that Qatari males have more options than females after graduating high school.

“Women are more motivated to study,” said Nitham Hindi, the dean of the College of Business and Economics at Qatar University, where female students are the majority, comprising 65 percent of the program. “I think part of that is because there is so many of them. They have to compete, so they have more drive and passion and do better,” he said.

“Men can study abroad without a chaperone, join the army and make more money with a high school certificate than I make with a PhD,” said Moza Almalki, a Qatari family therapist. “So why go to university here and get a headache?”

Women don’t have these options because most Qatari families don’t see the point in letting their daughters travel when such prestigious universities are here in Education City, said Sara Al-Saadi, a Qatari communications senior at Northwestern University in Qatar.

On one hand, this imbalance has resulted in a dramatic increase in the number of women in the workforce. In 2001, 10,000 Qatari women were economically active, according to a report released by the Qatar Statistics Authority. In 2011, the same report said the number increased to 25,000, and the number is projected to increase.

On the other hand, this has resulted in fewer marriages, the Qatar Statistics Authority and the Supreme Judiciary Council found.

“Some men feel inferior or jealous if the wife is more aware and educated, and this affects marriages,” Almalki said. She told the story of a client who nearly divorced his wife because their child wanted her help with homework instead of his help.

But many in the newer generation say there is no stigma associated with marrying educated women, said Soud Al-Boinin, a Qatari communications freshman at NU-Q. He added, “Education is an asset I would certainly look for in my search for a wife.”

But as women increasingly contribute to the economy, questions remain as to whether they will face a backlash from society.

“One of two things will happen,” said Geoff Harkness, a visiting sociology professor at NU-Q. “Society will either become more conservative and restrict the freedoms of women, or women will make gains and there will be greater equality.”

Ali Al-Ansari is hoping it’s the latter possibility. “More women are definitely joining the workforce,” said the social investment advisor at Shell in Qatar. He added that women used to have the set mentality that they would stay home and raise the kids, but their mentality changed, and so will that of the Qatari community’s.

Changing sentiments seem to be reflected in the Qatari government.

The emir’s wife, Sheikha Moza bint Nasser, runs Qatar Foundation, an organization that provides better higher education opportunities for all Qataris, including women. Today, many women in Qatar look up to her as a role model for female leadership.

“I see education as the wings for a girl to fly,” Almalki said. “I think Qatar is going forward, and I think Sheikha Moza is doing good for this country. Thanks to her, Qatar is booming with the women’s movement forward.”

One Response to More Qatari Women Hit the Books