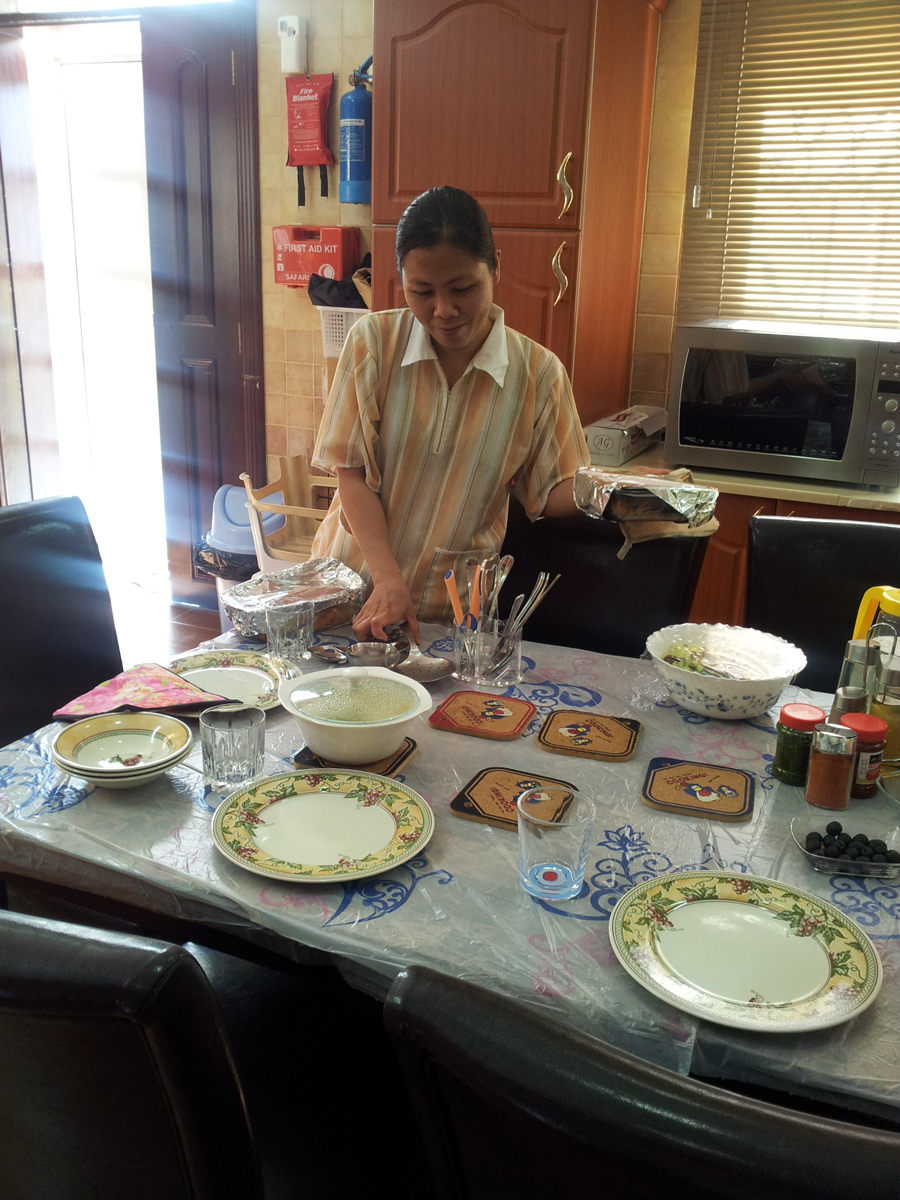 These are the names Genoveva was called every day while working as a housemaid in Qatar.

The 37-year-old Filipina, who said she was subjected to physical and verbal abuse nearly on a daily basis, eventually fled her employer and now sits in limbo at the country’s Search and Follow-Up Department, also known as the Deportation Center.

Once the paperwork is sorted out, she can finally go home.

Genoveva’s situation is not an isolated case. The number of abused domestic workers in Qatar is growing, according to a 2011 report by Amnesty International. The Qatar Foundation for Combating Human Trafficking reports a similar trend, saying there was a 4 percent increase from 2009 to 2011 in the number of complaints filed by maids.

The deportation center where Genoveva is housed currently holds more than 500 maids who have run away from their employers. Most of these women stay for a couple of months, depending on their cases and the paperwork involved.

The center, located on Salwa Road, provides food and shelter for these maids while investigating their stories. Nasser Al Khalaf, an official there, said that the center cannot instigate any action against potentially abusive sponsors until officials look into the claims of the maids. Even then, most employers go unpunished, he said.

“It’s a terrible condition. It’s terrible for the workers who come here… It’s even more drastic for domestic workers, like nannies and maids and drivers,” said Silvia Pessoa, an assistant professor of English and Sociolinguistics at Carnegie Mellon University in Qatar and a researcher on migrant laborers. “It’s tragic because these women are abused, verbally, psychologically, physically (and) sometimes sexually,” she added.

Many maids come to Doha with the sole purpose of supporting their impoverished families back home. But their monthly pay is low. Genoveva earned about QR950 a month, or about $260. Most maids send nearly all of their pay to their families.

But there are no specific laws that offer these women protection when they are abused or denied pay.

Officials usually refer to Law Number 14, the Labor Law, as an umbrella provision that covers the rights of domestic workers. But some dispute this point.

“They (domestic workers) have no protection in Qatar; they have no rights,” Pessoa said. “There’s a Qatari Labor Law, but domestic workers are not part of the law and they have to work for the person that sponsors them.”

“The person that sponsors them is their sponsor, their employer and the person they live with. So that creates lots of issues of power… The sponsor is very powerful and these women – especially – are very vulnerable.”

The lack of protection and legal recourse for housemaids has had severe consequences on domestic workers, particularly those of Indian origin.

Although Indian maids, who used to be in high demand because they are considered hard working – are not allowed to work in Qatar, some employers have found a way to get around the ban. Rashid Al Hajri, a Brigadier of the Immigration Department in Qatar, said that Indian maids are allowed in the country as visitors using a visit visa, which is valid for two months. Families who want Indian maids then change the visit visa to a working visa, allowing the maids to stay for a longer period of time.

Despite a lack of protection for their citizens, other countries have not followed India’s example.

Last year, the Philippines, the source of some 40,000 maids working in Qatar, released a blacklist of countries whose laws failed to protect its workers. Though Gulf countries including Qatar did not make the list, they remain under review for failing to observe the Philippine government’s standards with respect to migrant workers, officials said.

However, a memorandum exists between the Filipino government and the state of Qatar that defines all the rights and privileges of these workers, including a guaranteed minimum salary, proper treatment and free food and residence, said Philip Alano, an official at the Overseas Workers Welfare Administration in Qatar.

“But they’re not being followed,” added Alano, whose organization serves as a support center for distressed and abused Filipino housemaids.

Although the situation seems dire for some domestic workers, other maids report positive relationships with their sponsors.

“I am comfortable working here. I feel like I’m living in my own home. They are like my sisters, my family, and my madam is also nice,” said Jocelyn Brito, a 35-year-old Filipina maid who has been working in Qatar for eight months.

Last year, local media reported that a draft law ensuring more protection for domestic workers was released. This law supposedly addresses the rights of housemaids: food, housing, medical care, breaks in an eight-hour workday, freedom to practice religion and the right of a deceased maid’s family to file a case against the sponsor if they suspect foul play.

And earlier this month, Qatar’s Emir, Sheikh Hamad bin Khalifa al Thani, visited India, and made his first state visit to the Philippines, where the issue of the treatment of domestic workers was addressed, according to local media reports.

This initiative may mean that the situation and rights of domestic housemaids in Qatar will improve.

Pessoa said she is confident that because of increasing international pressure on Qatar in terms of human rights, the conditions will get better for housemaids.

“If Qatar is smart enough, they should be making progress in that area (human rights),” she said. “I’m optimistic, I think the situation is getting better. I think education plays a big role. But there’s a lot of work that still needs to be done.”

One Response to Maid Abuse in Qatar: A Growing Problem