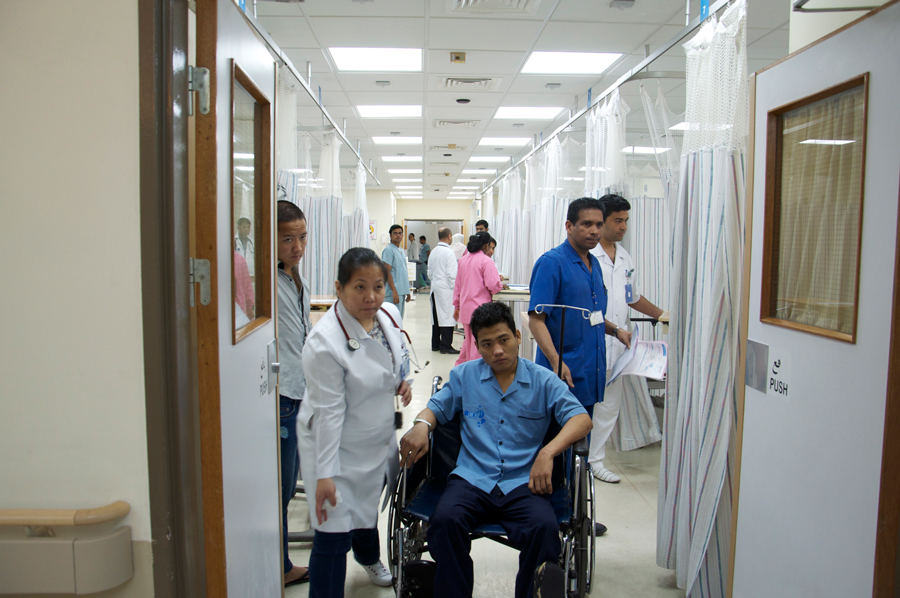 Getting medical treatment in Qatar can be complicated.

Most patients at Hamad General Hospital, Qatar’s main public facility, have grown weary with the drill, which entails utilizing defensive driving skills to find a parking spot, elbowing through a crowd to schedule an appointment and exercising patience when waiting to see a doctor.

For the lucky ones, the whole process, which can take several hours, culminates in a seven-minute session with a doctor. Often times, the patient must return another day.

With a growing population of 1.77 million, Qatar is no longer just a small country with small needs.

And its residents say one major public hospital in Doha is not enough. “All the pressure is on Hamad Hospital, we can barely keep up,” said Fatima Jassim, an occupational therapist there.

Jassim, who has worked at the hospital for over 25 years, said she has witnessed the massive growth of both Qatar’s population and its hospital facilities, though not at the same pace.

“Because it’s the main hospital, there is an increase in pressure as the population increases, as do the number of patients,” she said.

Less than a decade ago, back in 2003, the situation was less dire. At that time, Qatar had fewer physicians, but more hospital beds – 2 for every 1,000 people. Five years later, Qatar’s population grew dramatically, and the country hired 1,635 more physicians to deal with the growth. But it only created 555 more hospital beds, according to Qatar’s Annual Health Report.

In the emergency room (ER), which doctors say sees anywhere from 1,500 to 1,700 patients a day, the situation is even more telling.

Seif Talaat, an 18-year-old student, was rushed to Hamad’s ER after an injury on the soccer field. “It was an emergency, but it really didn’t feel like an emergency,” said Talaat, a freshman at Georgetown University School of Foreign Service in Qatar. “It was crowded, and there were more people than there should have been.”

After spending an hour on a hospital gurney, Talaat said he recalls a doctor briefly assessing his injury, and then telling him to come back in two weeks for an X-ray.

Instead, Talaat sought a second opinion at Aspetar, Qatar’s Orthopedic and Sports Medicine Hospital, where he found that he suffered a ruptured ligament.

Although Hamad is working to expand its ER facilities, the hospital still has quite a few improvements to make, said Dr. Bakr Nour, a professor of surgery at Weill Cornell Medical College in Qatar.

“For the time being, what Qatar needs are more emergency rooms, more operating rooms and more intensive care unit beds,” he said. “To serve all of the above you need hospital beds.”

Some residents have other options, including several private hospitals for those who can afford to be treated.

And as of 2009, Qatar had 30 Primary Healthcare Centers (PHC’s), scattered throughout the country. They provide general practice services such as patient diagnosis, regular medical treatment and health check-ups.

Dr. Mohsen Batir, an ER doctor at Hamad General Hosital, encourages residents to use their local PHC in less severe cases because it will “ease the load on the emergency rooms,” he said.

For expats, however, PHC’s may not be the most accommodating. The Advisory Council recently recommended that Qataris receive first priority for medical issues and care.

Yet, as Batir explains, doctors decide priority based the severity of the case, not by nationality. “If there is an emergency, all are the same,” he said.

The solution to the problem is simple, yet complicated. The construction of another major public hospital in the Doha area will alleviate the burden on Hamad General Hospital, but as Nour explained, hospitals aren’t built in a day.

This entry was posted in 2012 and tagged doha, healthcare, hospitals, qatar. Bookmark the permalink